A downloadable game for Windows, macOS, and Linux

You wake up with no memory. Your day is starting off great!

Nepenthe is a hand-drawn RPG with a terrible sense of humor. Set in the strange world of Carithia, you play as a creepy bald dude who lost his memory. Yes, you read that right. Meet some very polite monsters, and battle both them and your sense of self-dignity in epic bullet-hell fight scenes.

Definitely not a potato in a trench coat

Sporting a childish hand-drawn art style, Nepenthe is sure to either make you love it at first glance, or throw your computer away. The developer of Nepenthe takes no responsibility for such actions, and recommends drinking chamomile tea. “It’s really soothing,” he says. “You should really try it one day,” he says. “What was I talking about?” He asks. There is an awkward pause.

With three different endings, and countless side-quests, Nepenthe is designed for ultimate replayability. This can get quite annoying if you need to share a computer with someone else. Trust me. Almost every monster can be spared, for added challenge and less violence. They can also be killed - don’t worry, you psychopaths! If you enjoy dad-jokes or Chinese water torture, Nepenthe is for you.

Nepenthe is designed for both casual and hardcore gamers alike. Explore two "modes," "Adventure" or "Story," to find the play-style that best suits you.

"Adventure" mode is a bullet-hell extravaganza, with ever increasing difficulty as the game progresses.

"Story" mode's battles are easy one-click things, designed for those who just want the story, not the gameplay. 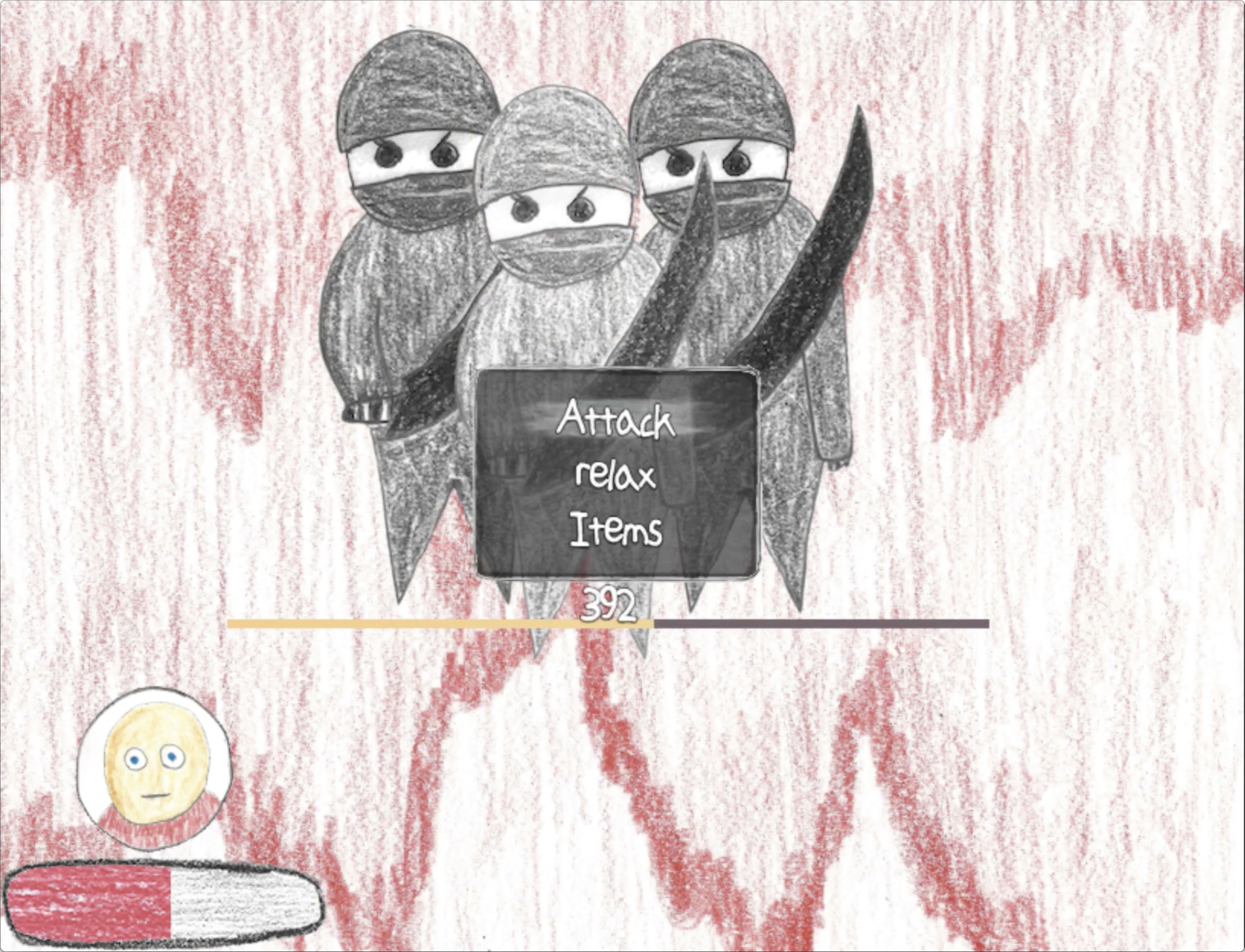 Battle Ninjas! ...if you want to, of course, we're not suggesting you actually do it..

Join us, as we stare into the Orb together.

In order to download this game you must purchase it at or above the minimum price of $4.99 USD. You will get access to the following files:

My feelings on this game are complex. It's fun and has good ideas but also a lot of flaws (and having worked with it I know some of those flaws are due to the restrictions of RPG maker).

There's one shop in the game early on, so getting money after that point doesn't matter. (Maybe you can walk back to it? Never tried.)

The core gameplay is fun, it feels a bit weird that all fights are basically scripted events but it works well for the scope of the game. Items felt useless, I'm not even sure what most of them did. I also sometimes had a bug where the first projectile in an attack wouldn't spawn visually but would still hurt me, which isn't great.

The characters are fun and colorful (literally), especially the old lady and her son.

A large portion of the game can be ignored completely and just provides flavor text and worldbuilding- Whether that's a good or bad thing is up to you.

The ending doesn't make sense- I had 2 runs where I did the exact same thing, except one I touched the orb and one I didn't. The guy accused me of lying about touching it either way, and the ending played out the exact same except the very last part was randomly different, despite on the surface nothing changing about how the events went and there being no real indication I shouldn't have touched it. And he says it's bad if the orb is exposed to sunlight, but it's exposed to sunlight on the beach either way? You also have to talk to the matriarch's son at a certain point in the story to get the best ending, even though he never references that conversation again and it has no effect on the story otherwise; the way this event changes the outcome of the story is not explained.

The ninja ending is awful since rpg maker decides a character is touching you if you're in the space they're currently moving into, it's basically impossible due to this.

It's a very minor thing, but I like how you can kill the trainer at the beginning.

I love the game and really want to join your discord, but i noticed that the invite wasnt working.... Can you update it please? : )

I'm using Playnite to manage my collection of games, and I realized this GIF file you are using for the background uses 72MB of data !!! I didn't even know it's possible to have a 70MB GIF.
Could you please optimize and compress this gif ?

do you know what the file name is for this gif by any chance?

It's in this background gif, and it's included in the game assets files. It is 72MB big so if you check the assets files it should be easy to find.

Edit: I did the research for you.. for this background it's this file: https://img.itch.zone/aW1nLzEyODE0NDUuZ2lm/original/TYouqL.gif

For the game assets, I don't know as I deleted the file, but if you open your game directory and order by file size you'll spot it easily :-)

Thanks, I’ll get to work on fixing this :)

Not working for me on mac Catalina.

It just opens a white screen, goes fullscreen and crashes :(

that’s unfortunately a known problem with Catalina—I’m working on a solution,  but I don’t know  how hard this will turn out to be.

anyone know what the music is from? (specifically the intro and that one guards music)

found the one from the guard fight, its this: https://www.youtube.com/watch?v=zwUTE4nGfJ4

This was really sweet, but I wish I could find a guide to the endings that describes them because I have a suspicion that my game has a glitch and won't let me access the good ending :(

I think I have the same problem; I’m getting the same “I touched the orb”/“I gave it to the shopkeeper” options whether I do the key or the pickaxe route.

Also, the glitchy boss behind the painting in the last area won’t actually die when he’s defeated. It just bumps me to level 11 and makes combat impossible LOL

Yes same! I've got the bad ending as well as the neutral ending but just can't seem to unlock the good one because he always thinks I've touched the orb even if I haven't.

I just got the best ending. He accused me of touching the orb anyway but there is one really subtle difference in my playthroughs for the 2nd and 3rd endings. When you're about to get on the boat with your friend, do not touch the orb on the beach.

I never found a glitchy boss behind any paintings though?

I think this will appeal to undertale fans. Very nice unusual art and music :) 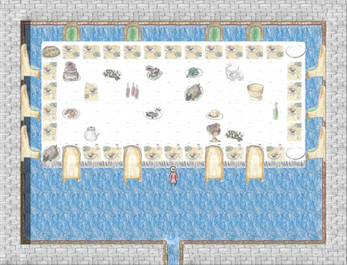 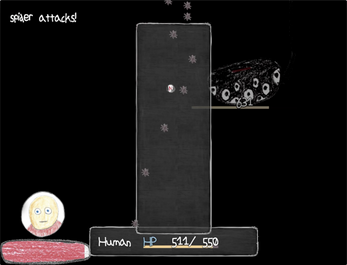 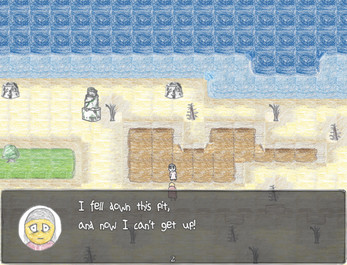 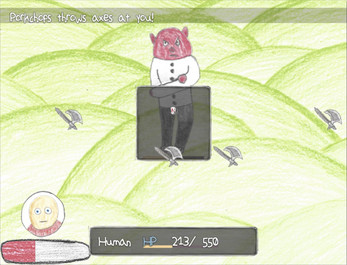 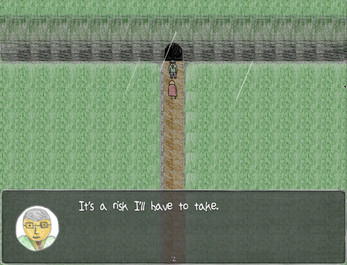